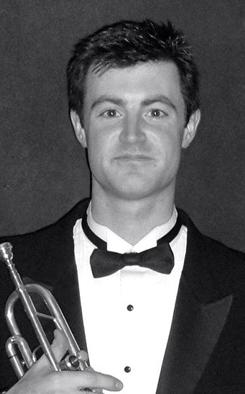 John grew up in Charlotte, NC, and began playing the trumpet at age ten. He started private lessons with Charlotte Symphony's Principal Trumpet, Michael Miller, at around age 14.  He quickly grew to realize how much he loved music and trumpet playing, and started devoting more and more time practicing it. He eventually became principal trumpet of the Charlotte Symphony Youth Orchestra and was 1st chair in the NC All-State band for 3 years in a row.  At age 17, he won a concerto competition and was asked to perform the Haydn Trumpet Concerto with the Charlotte Symphony Orchestra.  After high school, John attended the the Cleveland Institute of Music and studied with James Darling and Michael Sachs, both members of The Cleveland Orchestra.
While at the Cleveland Institute, John received a Bachelor’s and Master’s degree in Trumpet Performance. During the summers, John continued his studies with two summers at the Round Top Music Festival in Texas, one in Breckenridge, Colorado playing with the National Repertory Orchestra and two at the Tanglewood Music Center in Massachusetts.  He also attended programs at Yellow Barn Music Festival and The Las Vegas Music Festival.  Before leaving Cleveland, John was awarded the George Weber Award and the Bernard Adelstein Award, both for Excellence in Trumpet Performance.
After finishing his degrees, John moved to New York City to freelance, and within a year, while attending the Spoleto USA Festival in Charleston, SC, he won the national audition for Principal Trumpet of the Charleston Symphony Orchestra.  He held this position for two years before moving to California with his wife.  While in Charleston, John also served as Adjunct Trumpet Professor at the College of Charleston and was the 1st trumpet of the Charleston Brass Quintet.
Before moving to CA, John had performed with the The Cleveland Orchestra, the Canton Symphony Orchestra, the Iris Orchestra, and the New World Symphony among others.  He has played under the baton of legendary conductors such as Pierre Boulez, Kurt Masur, Christoph Von Dohnanyi, Seiji Ozawa and James Levine.  As a soloist, John has performed the Haydn, Hummel, Arutunian, Neruda, and Vivaldi Double Concertos with various orchestras and has even performed in recitals on the natural (Baroque) Trumpet.
John is now an active freelancer in the San Francisco Bay area.  He holds four principal trumpet positions- The Marin Symphony, The Stockton Symphony, the Fresno Philharmonic, and the San Francisco Chamber Orchestra.  He is also the 2nd trumpet of Opera San Jose and the 3rd Trumpet of the Oakland Symphony. He regularly performs with the San Francisco Symphony, San Francisco Opera, the California Symphony, the Monterey Symphony, Symphony Silicon Valley, Santa Rosa Symphony and the Berkeley Symphony Orchestra among others. When he’s not performing, John teaches privately at his home and around the Bay Area.  John’s other interests include cycling, running, backpacking, studying vegan health and nutrition, home roasting coffee, seeing live music concerts and spending time with his wife, Robin.